The Counseling and Wellness Center is available to all currently registered New College and University of South Florida Sarasota-Manatee students, providing services related to the development of the whole person; emotional and physical well-being, as well as academic concerns. A Wellness philosophy is the foundation for all services and programs.

Disability office for the Tampa Campus. They can be reached at 974-4309. http://www.sds.usf.edu/index.asp

The mission of Students with Disabilities Services is to encourage and support students with both temporary and permanent disabilities. Our office is committed to developing an individualized plan for academic accommodations that will enable each student to participate fully in an enriching academic experience. 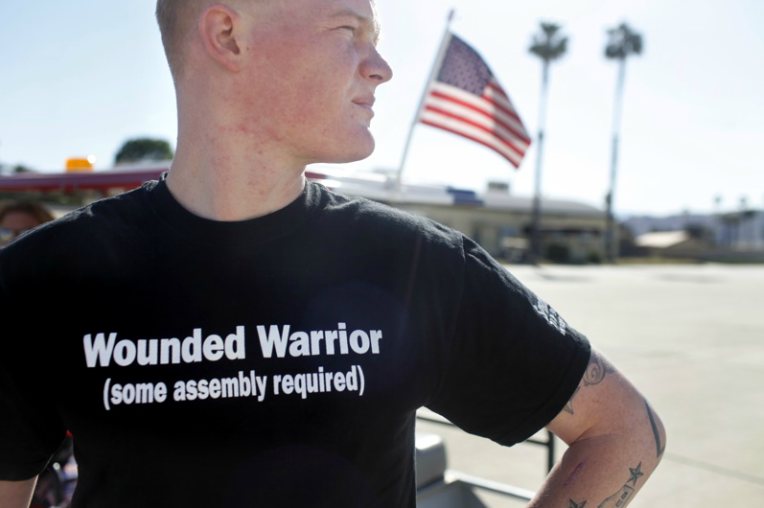 Essence of a Man

On the day after Thanksgiving, U.S. Marine Corps Lance Cpl. Justin Gaertner, 21, was patrolling for mines in the Marja district of Afghanistan when an improvised bomb, stuffed in a glass jug, exploded beneath his feet.

His legs were decimated. Shrapnel blasted into his abdomen and shredded his left arm.

He was flown to Washington, D.C., where he began what doctors said would be a long and daunting recovery.

Of the 46,000 American troops wounded in a decade of war in Iraq and Afghanistan, more than 1,200 have lost a limb. All of them face grueling treatments and uncertain futures as they return to life back home.

A graduate of Trinity’s Mitchell High School, Justin had always believed the Marines helped him grow up. But that bomb, in an instant, had reduced him to a child: diminished, dependent, unsure.

For him, adjusting to life without legs was about more than wanting to walk. How could he prove his strength to others, to himself? How could he, for a second time, grow into a man?

Justin Gaertner is standing on a military airstrip when the Boeing 767 jet roars into view.

It is a cool Sunday morning in May, and at this base near the Moreno Valley people have gathered to celebrate the end of deployment. Two companies of Marines are returning home after seven months at war in Afghanistan.

Justin squints into the sunlight, watches the jet get closer. It has been six months since the men on that plane saw him almost die.

Justin is standing on two new prosthetic C-Legs. For months he stormed through physical therapy, training twice a day, learning to balance. He wanted to be here when his buddies got here, to show them how much he has changed.

But now, as the jet wheels closer, he feels scared. He hasn’t had much practice on these legs, and he’s scared he’ll totter and fall. Scared a Marine will lift him clean out of his legs. Scared he’ll look powerless, like he needs their help.

Men stream off the jet in single file. Men with machine guns, with buzz cuts, with rolled-up camo sleeves. They see the man with the chrome legs and they smile and hurry over, hugging him with rifles in hand. Justin stands tall and proud. He has seen his brothers home.

It isn’t until an hour later, walking across the Marine base at Camp Pendleton, that Justin falls. Lands hard on the concrete on his ravaged arm, still carved in deep with shrapnel.

He grimaces and squeezes his eyes tight.

Slowly he pushes himself back up. Stands on his rigid legs. Starts walking. These are the wins and pains of growing. This is being alive.

Justin and his mother, Jill Dalla Betta, wake up in a cramped hotel room far from home.

They live in the Mologne House, on the campus of the Walter Reed National Military Medical Center, where Justin gets treatment. Their room is a cubbyhole: Clothes are stacked in the corners, food in a dresser. They have no kitchen, no living room, no privacy. Jill will, per doctor’s orders, stay here with Justin for nine months.

Her job is to do what Justin cannot. She gets his meals. She cleans. She helps him walk up curbs. She ties and zips. She remembers when he forgets.

Justin needs the help but hates that he needs it. He is supposed to be tough, a Marine, in a battalion known as “The Super Breed.” His own man. Instead, he lives with his mother. He feels caged and defined by his flaws.

Angry, he snaps: at his aching, good-for-nothing arm; at his body, for doing too little; at Jill, for doing too much. Her presence reminds him of what he has lost.

“He says, 'Mom, I did this to protect you and the rest of the family,’ ” Jill says. “I feel like he’s angry at me for what happened.”

At night she watches him sleep. Eyes his red-blond hair, his smooth cheeks, his legs that end too soon. She hopes this is all a dream, that she’ll wake up one morning and they’ll both be home. “That’s my baby,” she says. “That’s my boy.”

She wants him to see a counselor, but Justin says there’s nothing wrong. Doctors have asked him to arrange blocks and shapes, asked if he thought someone was trying to steal his soul, asked if he wanted to kill himself. They say he has short-term memory loss, problems focusing and a quick temper. “I don’t get mad very easily,” he says, “but when I do it just kind of — it goes from nothing to a lot real quick.”

Justin does not take pain pills, says they’re for the weak. Doesn’t like sleeping pills either. Asleep, he is haunted by searing nightmares: the death of his fire team leader, the explosion beneath his best friend in the seconds before Justin lost his legs. In the desert of his nightmares he smells the stench of burning flesh.

Awake, he sees spiders on the walls. Feels phantoms shake the bed. Bursts from the shower yelling, “I can smell it! I can smell my flesh burning!” Scares Jill. Scares himself, too.

One night, when Justin can’t sleep, he wakes Jill and tells her to make a bed for him on the floor.

She lays out blankets and helps him down.

Justin sprawls across the living room rug, watching Beverly Hills Chihuahua with his sister, Nicole. She is 6 and home from school. She sits in his wheelchair, eating apple slices.

This afternoon she has brought him a classmate’s crayon drawing (“Fank You for Fighting!”) and wrapped her little arms around his hips. She doesn’t hide her smile. Justin is back from D.C. for two weeks. Since the explosion, this is his first time home.

Justin’s family lives in a manicured suburb called Thousand Oaks. Jill and Larry, his stepfather, have moved Justin into their master bedroom, where his wheelchair fits. In a corner of the room Justin plunks down his bloodied flak jacket, the one he was wearing when he was hit. It’s powdered with desert dust and smells like burnt fertilizer. In the drop pouch rolls a stray grit of shrapnel.

After months on the battlefield, and in a surgical suite, and in a wounded warriors’ gym fenced with prosthetic legs, it feels foreign to be somewhere as ordinary as home. Justin splays out lazily, stretching. He looks like a college kid home for winter break.

Justin is slowly remembering what it feels like to be normal. To be neither a victim nor a hero, but to be a man. It’s a challenge unlike relearning to stand or walk or grip. No workout regimen, no laser surgery, no prosthetic can make you the person you used to be.

He says he appreciates things in a way he never did. Talks of his past like a gift. “I’ve done more in the past four months,” he said, “than I have my whole life.”

Justin swims in the backyard pool, kicking his nubs for laughs. Tickles Nicole’s feet and blows in her ear and drags her giggling across the rug. Justin’s 12-year-old brother, Larry Jr., stiltwalks with Justin’s crutches, wobbling through the living room, as Justin gives him pointers. “When you think you’re going to fall,” he tells him, “try and maintain your balance. That’s pretty much what we have to do. It’s a balancing act the whole time.”

At night, when Justin wheels to bed, Nicole bear-hugs his prosthetic legs. Each is as tall as she is, and heavy with electronics, yet she teeters to the dining room to plug them in. She makes it a nightly ritual for the rest of Justin’s stay. It’s the only thing she can do to help her brother walk.

Justin is in his wheelchair, pumping his fist, at a makeshift DJ booth he built in his living room.

It is late one Saturday night in August, and Justin is throwing a party with a few Marine buddies from down the hall. Dance music booms from a loudspeaker as Tyler Southern, a triple amputee from Jacksonville, sings and laughs . Justin is in his element, relaxed yet ecstatic. This is the place he can now call home.

It has been a few days since his mother flew back home to Trinity and Justin moved into a Walter Reed building called Tranquility Hall with his friend Matias Ferreira. This is Justin’s next step of treatment. True independence, living on his own.

When they moved in, the newly liberated Justin and Matias took pictures of their first home-cooked meals: a dinner of bow-tie pasta and Italian sausage, a breakfast of waffles and microwave bacon. They spent nearly $2,000 at Bed Bath & Beyond, buying a black satin comforter set, patterned pillows and glasses for margaritas. On the windowsill, for ambience, they lit a few votive candles.

Justin’s days are packed. He rides a handcycle and is relearning to drive. He is taking classes in algebra and public speaking, with hopes of becoming a physical therapist. He has gone skydiving and water skiing and running on prosthetic legs. He is already thinking of his next event for after Thanksgiving: an “alive party,” with pizza and chicken wings, to celebrate a year reborn.

But for tonight, Justin is absorbed in his headphones, queueing the next upbeat song on his MacBook Pro. A trumpet and tuba player in grade school, he felt his love for jazz and music theory lapse across three deployments. Now, playing with the rhythm, he feels it coming back.

He’s finding he likes the simple things: playing music, living on his own, standing on his prosthetic legs and looking people in the eyes.

But now, as the music booms, Justin and Tyler — 20-somethings, after all — decide to do something a little abnormal. Justin drops onto the floor, rolls onto his shoulders and kicks his legs into the air. He does a headstand.

The blood rushes to his head, and the world is upside down. The music keeps a beat.

The blood rushes to his head, and the world is upside down. The music keeps a beat.

SEE WHAT THEY SAW

Photos of Cpl. Justin Gaertner are featured in "Conflict Zone," an exhibit that opens with a reception from 6 to 8 p.m. Saturday, November 12, 2011 at the Poynter Institute, 801 Third St. S, St. Petersburg. The exhibit, featuring more than 20 of the world's leading civilian and military combat photojournalists, was inspired by Joao Silva, a New York Times photographer who lost both legs in 2010 after stepping on a land mine while on assignment in Afghanistan. Proceeds from "Conflict Zone" (www.conflictzone.org) benefit injured journalists and troops.

To view this article in it's entirety with pictures, please visit: http://www.tampabay.com/blogs/alleyes/content/justin-gaertner-essence-man