The judicial branch is made up of the Supreme Court, Lower Courts, Special Courts, and court support organizations.

Supreme Court of the United States 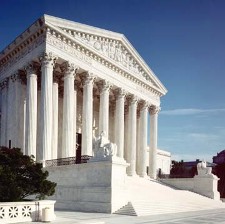 Courts decide arguments about the meaning of laws, how they are applied, and whether they violate the Constitution. The latter power is known as judicial review and it is this process that the judiciary uses to provide checks and balances on the legislative and executive branches. Judicial review is not an explicit power given to the courts but it is an implied power. In a landmark Supreme Court decision, Marbury v. Madison (1803), the courts' power of judicial review was clearly articulated."